I like rice. Rice is great if you want to eat 2,000 of something.
Mitch Hedberg

If you ran into an acquaintance today and talked for more than 90 seconds, you probably made at least one small-talk comment about the weather. It’s what Americans do. In similar fashion, here in Nepal the standard greeting is almost always “Kana kanuboyo?” (“Have you eaten?”). They think it quite odd here, in fact, if you bring up the weather. Maybe it’s too obvious. Or just waaay out of our control. At first, thinking they really wanted to know, I answered the question literally, diligently sharing the details of my hour’s lunch-break. But then it dawned on me — this was a sort of conversation-filler, more like “How are you?” than a true fact-finding mission.

In a similar vein as one previous entry, I wonder if this little observation lends some insight into a culture’s values and identity. There’s a tribe of Australian aboriginals, for instance, whose small-talk currency is “Where are you going?” Not coincidentally, the Guugu Yimithirr tribe are a people possessed of a fascinatingly good sense of direction. (If this sounds vaguely familiar, you probably heard about them on a recent RadioLab segment.) Their whole cultural being is centered around the cardinal directions of East, West, North and South — so much so that they actually refer to a chair in the “north-northwest corner of the room,” or a fly that landed on the “east side of your northern leg.”

I was therefore curious to know why Nepali’s seem to be so concerned with food and eating. It’s not just in general conversation, either. If there’s one single question that we are invariably — anxiously — asked by every patient, it’s “What foods can I eat?” This strikes me as rather odd. In general, most foods are fine for most patients. The staple of the Nepali diet, dal-bhaat-tarkhari — a balanced blend of rice, lentils and curried vegetables — is in fact a meal that nutritiously hits all the major food groups.

So with Dhan Ropai upon us, this ceremonial start to the rice-planting season seems a good time to reflect on the culinary traditions of Nepal.

As it turns out, there are some very interesting reasons for the almost obsessive Nepali cultural interest in eating. For one thing, this remains a largely subsistence culture, with high rates of malnutrition and little margin for food shortages or crop failure. I’ve seen an amazing number of children here that are well below the 3rd percentile on our growth curves.

Furthermore, Aruyvedic doctors — Nepal’s religious healers — place enormous emphasis on exactly which foods are OK, and which are forbidden. As in other Asian cultures, the traditional understanding of health is intimately linked to concepts of “hot” and “cold” (constitutions, illnesses, food therapies). You’d be taking your life into your hands if you dared eat something cold, like yogurt, while having a “cold” — to say nothing of our chilled orange juice remedy in the West. I think at these times my medical judgment is called into question. How ludicrous that I could suggest warm soups and liquids for their child with a fever! 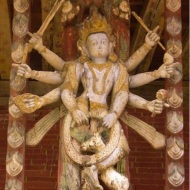 There have been heroic efforts at Tansen Hospital over the years to encourage good nutrition among villagers, especially children. We have a Community Nutrition Rehabilitation Center that offers dietary consults, education services and inpatient feeding programs for severely malnourished children. Mariam Krantz, a long-time missionary who first came to Nepal at age 26 (and just recently celebrated her 50th anniversary here!) is an internationally known nutritionist with U.M.N. She has worked closely with the people of Nepal to combat malnutrition, and is perhaps best known for developing a high-protein “super flour” (Sarbottam Pitho) made from roasted corn, beans and wheat. She has joined countless others throughout the country helping to improve communities’ nutritional standards.

As for me, momo’s remain one of my favorite foods here. They’re a kind of Indian-Chinese fusion dumpling (which makes sense, given that Nepal is sandwiched between these two giants – “a yam between two boulders,” as the proverb goes). They can be steamed or fried; crescent-shaped or circular; meat, veggie or cheese. Each momo place has it’s own distinct folding technique and seasoning style. And while I’m yet not tired of dal bhat or tandoori roti, I AM for sure missing ice cream – it’s just not the same here! 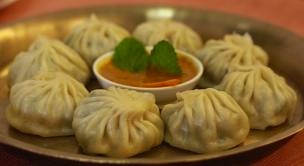