As I write this, the screen in front of my seat says that we are presently some 39,000 feet above Dublin, en route back to Kathmandu and (eventually) Tansen. I’m returning to Nepal after a whirlwind visit home for my sister’s wedding — SUCH a glorious time! (Of note, I tried to fly a bit under the radar during this trip back, since I knew schedules would be tight and wanted to be 100% available for wedding preparations; apologies if we didn’t get to connect this time around!) In honor of the joyful occasion, I thought it would be fun to share a few Nepali wedding traditions… 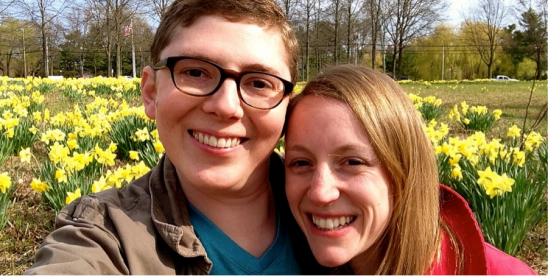 Because of numerous ethnic groups across Nepal, it’s hard to generalize about “Nepali” wedding customs, which can vary widely from region to region and even from village to village. However, as in America and the world over, weddings are times of joyful, extravagantly festive celebration, usually lasting several days.

If you know anything about marriage customs in south Asia, it probably has something to do with the practice of arranged marriage. Indeed, in traditional Hindu societies, marriages were historically arranged by two sets of parents on behalf of the bride and groom, a practice that remains widespread today, although often in modified forms. However, prem beiha, or “love marriage” is also becoming increasingly prevalent, particularly in urban settings with the influx of Western customs and attitudes. Child marriage, also previously common, has fortunately become rare except in very remote villages, with the passing of national laws that set the marriageable age at 18.

Marriage in Nepal tends to be monogamous, and in this highly traditional society, divorce is rare. Marriage arrangements are traditionally patrilocal, meaning women move in with their husband’s kin after marrying. However, this too is changing, as families are often now living on their own, a trend increasingly popular among Nepal’s younger, more urbanized generation. However, when a bride is to live with her in-laws, it’s not uncommon to see her weeping as she is ceremonially led away from her own family and childhood home (or “maita”) and ushered into the groom’s family home. Challenging in-law relationships – including, not infrequently, physical and emotional abuse – can add to the stressful anticipation of the move.

In some castes or ethnic groups, such as the Newari and Magar groups, elopement is more common. Yet even then, specific practices are in place to guide the

young couple’s covert union, and eventual welcome back into their local community.

Hindu wedding ceremonies in Nepal are dictated largely by the astrological determinations of a local village priest, according to the Vedas, or Hindu scriptures. Astrology, for instance, plays a major role in determining whether a match is suitable, which months are appropriately matrimonial (i.e. mid January to mid-March, mid-April to mid-June and mid-November to mid-December), and which date is most auspicious for the couple’s ceremony.

Red is the traditional bridal color in Nepal and India. Brides are adorned with voluminous amounts of gold, jewelry and precious stones – traditionally, part of the dowry given by the bride’s family – and elaborately tattooed with a hemp-based (non-permanent) ink called mahendi. 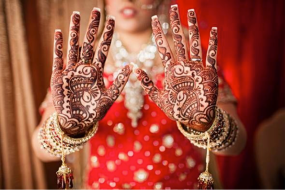 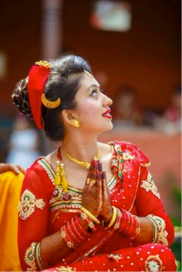 When processing to the ceremony, the groom and his family will sometimes make their way with a crowd of guests through their village to the bride’s home, where she has been prepared and is waiting. Alternatively, a band-led procession may leave the groom behind, who waits at home while his family collects the bride and carries her back (literally, in a hammock or basket) the following morning.

When finally introduced, the bride and groom are seated together on a platform sheltered by a three-sided silk tent. Guests then line up to give them a red tikka (rice mixed with vermillion powder and yogurt), a colorful scarf and a gift, wishing them Badhai chha, “Congratulations!” (With anywhere from 500-1000 guests, this part can take hours.) After a day or two of rituals led by the priest, the couple symbolically share a meal from the same plate.

The ceremony is held in the open under a canopy known as mandap, with a sacred fire in the center. The venue is vibrantly decorated with colors, flowers and lights. While customs vary, the celebration usually also involves plenty of music (drums, horns and cymbals) played enthusiastically to announce the occasion for all in earshot. (The exuberant sounds can continue from before dawn until well into the night by a seemingly tireless band.) Meanwhile, guests join the couple in a feast of traditional dishes.

Weddings in Nepal are tons of fun, with plenty of dancing, fancy clothes, food and time with friends. It’s sometimes a challenge to attend weddings if long travel is required, especially without a lot of lead-time. (My record for the latest invitation received was the afternoon prior.) However, in true communal style, people are very gracious, and enjoy having guests drop by for as long or short as they are able to join in celebrating the new union.